I’ve got the post-show blues. It’s always quite a big come-down after taking part in a big stage production, but even more so when you’ve really loved being part of not just the show itself, but the show-family that forms in the process. I’ve learnt so much from taking part in this particular production, and genuinely enjoyed it from start to finish, that it’s a hard one to let go of. I miss the theatre, I miss the people. I miss the backstage laughter and the onstage buzz. I miss my little knitting circle too. I think half the cast had had a go at knitting something by the end of the run!

Fortunately, I already have the next couple of shows lined up, which always helps limit the bluesy feelings. One is in rehearsal already and the next one starts rehearsing in December, so I’m going to make the most of a slightly quieter November before I start juggling two sets of rehearsal schedules!

This week is also busy enough to keep my mind off it anyway, as it’s cake-time again. We’ve recently celebrated Pumpkin’s birthday, and so it’s party time at the weekend, which means another elaborate cake creation is on the cards. He’s into Mario Kart at the moment, so I’m trying to plan something on that theme. Watch this space!

I’ve done a bit more work on my coffee table. There’s a little more sanding to go and then I can paint it. My knitting is going as slowly as ever, but little by little I’ll win.

We harvested the last of the veg from the garden at the weekend, so I’ll leave you with this colourful photo to banish the blues.

Rehearsals are stepping up a gear for the show I’m performing in at the end of the month. We still have our little knitting corner when we’re not required for a particular scene, and generally it’s all very enjoyable.

I’ve also just auditioned for two more shows – a musical and a play – and have ended up being cast in the role I wanted for both of them! They’re like buses. I did heaps of auditions in the summer and was only cast in one and now two come along at once! Typical! Should be lots of fun though, as long as I don’t wear myself out with all the rehearsals!

As for the knitting, it continues, just very very slowly, not helped by the fact that one of the new needle tips I bought was already catching in the grain so I had to get back to the shop to exchange it. Fortunately Knitpro have a great policy of replacing faulty needles so it didn’t cost me any more.

I took a calculated approach to the remaining grey yarn. I weighed and divided it into two balls, then I cast on and knit a cuff to a length that would match the other edges of the cardigan. I weighed the cuff and the remaining yarn to work out how much I had left for stripes. Then I ripped the cuff out again and got to work. I managed to do the two stripes at the top of the sleeve out of what was left and know I still have enough for the cuffs at the end. 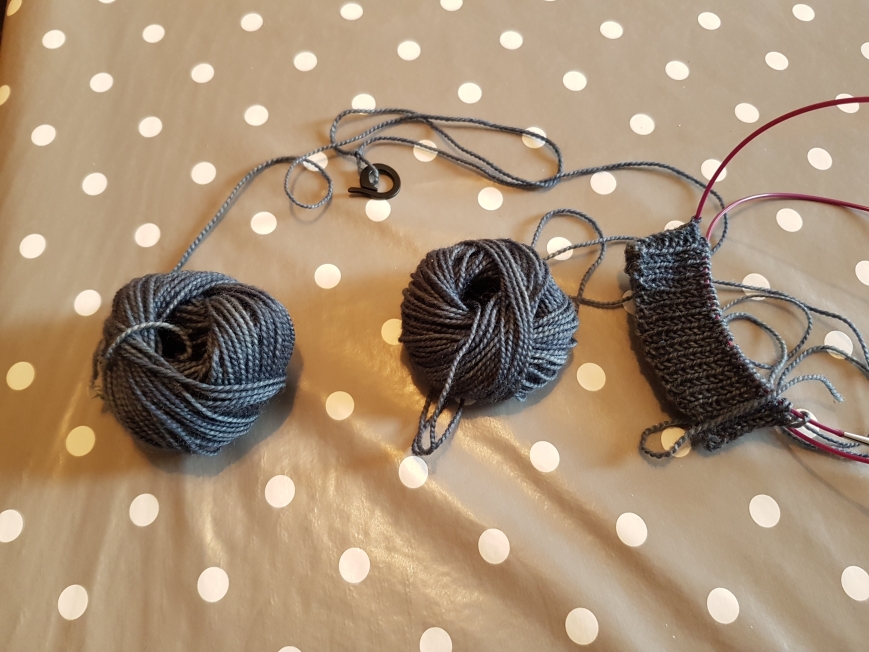 I’ve started striping in the lighter grey yarn and quite like how it’s looking so far, I’m just not sure how it will look with the whole sleeve done in a different grey. Time will tell.

As if I needed anything else to work on, I just spotted a small but solid pine coffee table outside a charity shop which I thought I could tidy up by stripping it down and painting or waxing it. We don’t have a coffee table in our living room and I’ve wanted one for ages and at only 8 quid and with some paint leftover from the desk I did a couple of years ago, it couldn’t hurt to try and see what happens. Just gotta find the time to do it around everything else!

The eagle-eyed amongst you will also have spotted that we’ve done absolutely nothing more with the study. Still a sidelined work in progress. As is the garden currently. It’s silly season out there too as the garden is gradually getting covered with leaves and chestnuts and I remember how much hard work it took to keep on top of it last year. Speaking of which, it’s very nearly a whole year since we moved in here and I just can’t fathom where all that time has gone!

I’m still running. After doing very little over the summer it actually felt great to get back to parkrun. My times were much slower than back in July, and then I ran a couple with the boys – both of them have now run/walked a full 5k – so I was pleasantly surprised to get a new PB last week when I ran it on my own again. Unfortunately rehearsals mean I can’t do parkrun for the next couple of weeks but I’ll keep up the weekday running and get back to it as soon as I can.

The icing on the cake of October is of course Pumpkin’s birthday. He’s very into Mario Kart at the moment, since Mr Jack busted out the old GameCube – retro gaming! – so ideas on a postcard please, for how to make a Mario Kart cake without it being insanely complicated!

I must say, I’m very much looking forward to half term. The boys are exhausted from new school adjustments but they’ll be packed off to the grandparents for half the week while I’ll be rehearsing all hours. But a change is as good as a rest, and I’ll hopefully get a few lie ins.

What do you have going on in October?