I made my first pair of trousers! Oh yes I did!

They were done in time to wear them for crewing the Panto at work, which was just as well, since my previous work jeans acquired some extra ventilation in the knee department a few shifts into the run of the show. For any non-Brits around here, panto, or pantomime is a very silly theatrical tradition, which is very serious business around this time of year. Personally, I’ve always hated panto, but I’ve seen it in a different light this year, and being backstage has been an absolute blast! 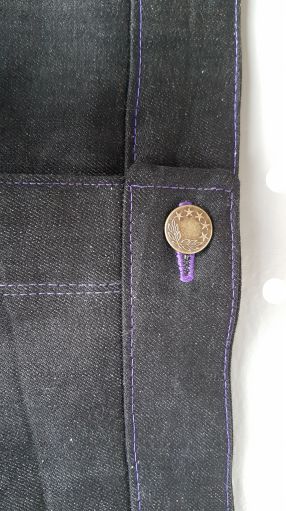 The Bryce Cargo pattern from Hey June Handmade was a great starting point. The PDF pattern was super easy to print and piece together, and the instruction booklet was excellent. Well laid out and easy to follow.

I made several modifications to the original pattern, including redrafting the front pockets from hip-slash to jeans-style, and changing the pocket bags to a pocket stay, omitting the pocket flaps from the back pockets (and the leg pockets, though I hadn’t intended to) and redrafting the lower leg to be longer and wider.

The finished trousers are not without their flaws, but are perfectly serviceable for the job. I now want to make a second pair and eliminate some of the imperfections of the first.

The front pockets are fab. I might be tempted to modify the depth of the pocket bags, but the redraft worked very well, the openings are a good size and the pocket stay gives extra structure to the front of the trousers.

The back pockets really don’t need a flap, but the jury’s out on the cargo pockets. I quite like them as they are without a pocket flap, but I think they may look better with one. I intended for them to have a flap, I even made them up, but sewed the buttonholes a little too small for the buttons and couldn’t be bothered to redo them. They were also quite bulky once folded over and possibly a fraction too short, and I thought the buttons might stick out a little too much and be prone to catching on things when shifting stuff about at work. At the stage that they were due to be attached, I was worried about the overall fit of the trousers – they looked like they might come up too small, so I wanted to get the leg seams at least basted so I could check the fit – so I thought I’d leave the pocket flaps and come back to them later. Of course, once I’d sewn the leg seams, it was then impossible to sew the flaps without ripping everything out again! So they got left off. I think next time I would cut them maybe 10mm longer than the pattern piece and try again with the buttonhole, or perhaps go for poppers instead.

The biggest problems with these trousers is the fit and the length. Both of which are my own fault. Firstly, I need to trust the seam allowances. That would go a long way to sorting out the slightly baggy fit at the waist/hips. I may also do a bit of a fit diagnostic on the rise before I go again. Secondly, I need to get someone to help me measure my legs as it’s very difficult to do it yourself. I added half an inch above the knee, which is about right, but I only added one and a half inches below the knee to take it from a calf length to a full length trouser leg. And I’m tall! I think an additional two inches would not go amiss, and even that is possibly too little. I think I’d also flare the leg out a bit further for preference.

Both of my female colleagues have admired them and even requested a pair already. I’m sorely tempted to oblige them, as i know women’s workwear is hard to come by, but I’m definitely making myself a second pair first.