Work on the Clanger has stalled, and it’s currently looking like a rather strange pink penguin. 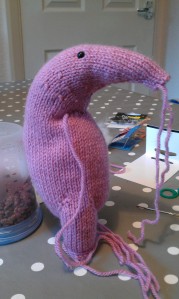 Instead, I have been working on the annual cake-creation for the Pumpkin’s birthday. He’s been very into ‘Dragons: Riders of Berk’ on CBBC recently, which is part of the same franchise as the ‘How to Train Your Dragon’ films, so he decided a couple of months ago that he wanted his party to be themed along those lines, including and especially, his cake.

I thought I could get away with the easy option of just stacking a couple of cakes to make the Island of Berk, and buying a couple of figurines or toys of Hiccup and Toothless to stick on the top, which he could then keep to play with afterward, but I scoured the shops for something suitable and couldn’t find what I wanted. So that left me with the not-so-easy option of attempting to make an actual Toothless Cake! For those of you not familiar with him, this is Toothless: 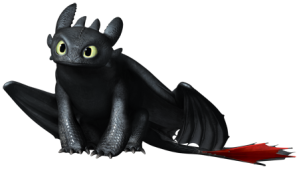 A quick scan of google images and Pinterest showed me many rather impressive creations, and some less successful ones! Fortunately, some kind person has made an excellent Youtube tutorial, demonstrating exactly how to go about making Toothless in cake form.

I started with two large chocolate mud cakes (recipe here) and glued them together with chocolate ganache (recipe here). I’ve never carved a cake before, but once I got started, and with the tutorial for reference, it was actually alot easier than I expected it to be, and really quite satisfying seeing the dragon shape emerge. 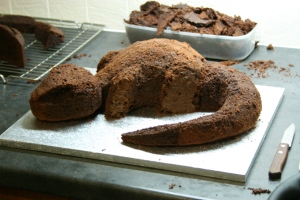 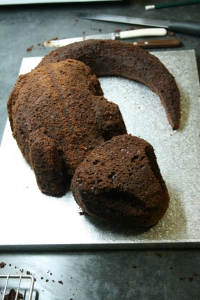 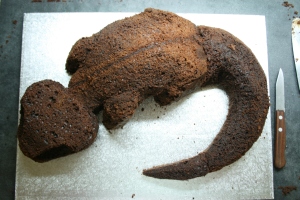 Once the basic shape was there he was covered in ganache and left to chill out in the fridge overnight.

Covering him in fondant was more of a challenge. I started out trying to cover him using as few pieces of fondant as possible, but it was really hard to roll out a 2D shape that was the right size and shape to cover a 3D cake. I tried to cover the whole tail in one piece a couple of times, but ended up doing it in 2 pieces. Once I realised that actually it was possible to blend the two pieces so you couldn’t even see where the join was, the whole thing became much easier  and far less daunting to do. I think I used 3 pieces to cover the body in the end, and did most of the legs separately. The head was all done in one go though, including his ears and horns at the back of his head. Once the black icing was on, he only needed a few small extra details – eyes, claws, spines, tail fins and wings, and he was all done! 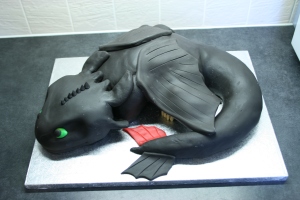 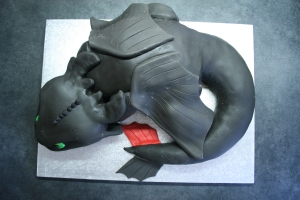 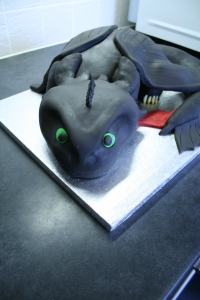 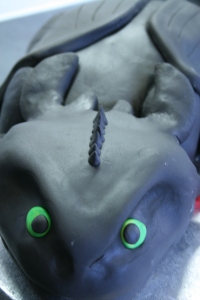 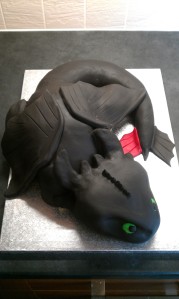 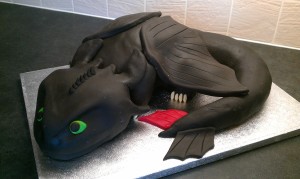 I would have liked him to have a bit more texture to his skin, but there was no easy way to do it, so he stayed smooth-skinned. I also made some cupcakes with printed toppers of other characters from the show, which complemented the cake nicely. 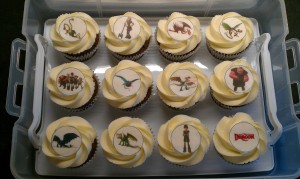 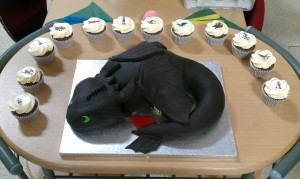 I received some lovely compliments from the grown-ups at the party, including a near-commission. The cupcakes went down well with kids and adults alike, and the kids mostly knew who the cake was meant to be! But the best moment was seeing the look on Pumpkin’s face when I held his hand and brought him to see the cake laid out on the table. He happily went round telling everyone that ‘Mummy said she couldn’t make a cake like that, but she did it!’  If that’s not the best kind of encouragement for trying something new and challenging, I don’t know what is!?

I don’t really watch very much TV. Not actual broadcast TV anyway. My hubby and I tend to plough through DVD boxsets, one or two (or oh-my-goodness-we-have-to-watch-the-next-one-as-well) episodes per evening after the kidlets are in bed. But every so often … END_OF_DOCUMENT_TOKEN_TO_BE_REPLACED